Mental health in the maritime sector, as in other sectors, has been swept under the carpet for years and now seems to be enjoying its moment in the sun. This is not a bad thing since the stigma around discussing mental health is the first challenge that still needs to be addressed.

The recent ITF Seafarers’ Trust sponsored research by Yale University’s Occupational Health and Environmental Medicine Program confirmed findings of a number of existing research papers and shed new light on the issues of depression and/or anxiety, their causes and the connection with risks of accidents and illness. This is important since it adds a clear economic interest for companies to take the issue seriously. Some do, some say they do, and some couldn’t care less. Seafarers suffering from depression and/ or anxiety were around twice as likely to have injuries and illnesses compared with their happier and less stressed colleagues, which might even concentrate the minds of less enlightened employers.

There is nothing to suggest that seafarers are inherently more likely to have mental problems than others, but the specifics of their employment do have a significant impact on their collective state of mind.

For companies, that means promoting a company culture that is committed to destigmatising mental health. For seafarers it means having an open mind to challenging a macho environ- ment that keeps feelings locked up and limits people’s ability to ask for help. One startling result of the survey was the number of seafarers who report- ed exposure to violence or threats of violence, which, not surprisingly, correlated with feelings of depression and anxiety.

It’s all well and good to encourage seafarers to eat healthy diets, drink lots of water, take regular exercise and get enough sleep (all of which certainly do help with a healthy mind) but if you don’t have control over who buys your food or any space or equipment for exercise on board this is easier said than done. And if you’re being mentally bullied or physically threatened, more green vegetables are not the answer. In fact, there is no one simple answer but a range of preventative measures that can be put in place.

The study shows that seafarers are particularly vulnerable at the early stages of their careers. This would suggest that more needs to be done to prepare new recruits for the challenges ahead and set up structures to support them. This could be formal buddy schemes or something more informal between friends and crew members. Seafarers also cited a lack of training for the tasks they have to perform and an uncaring working environment – again these are issues of good management and organisation – companies need to recognise that these operational and environmental factors are much more important than telling seafarers to manage their own mental wellbeing.

Getting to the root of the problem

The Yale University Seafarer Mental Health Study drew on a sample of 1,572 seafarers who were representative of serving seafarers across the world, of different ranks, on different vessels, with different flags. It found that within the previous two weeks of completing the survey a quarter of them had suffered depression, 17% had experienced anxiety and 20% had contemplated suicide or self-harm.
The Seafarer Mental Health Study for the first time also found a link be- tween depression, anxiety and suicidal ideation (thoughts) and a greater likelihood of injury and illness on board. 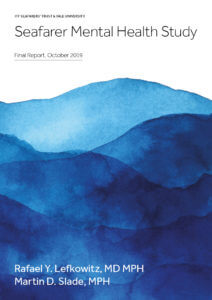 The significance of the link to violence and bullying at work had not been previously drawn so clearly. Seafarers from the Philippines and Eastern Europe were four times as likely to report having experienced or witnessed violence as those from Western Europe.

The study’s authors were Dr Rafael Y Lefkowitz, MD MPH and Martin D Slade, MPH, from Yale University’s respected Occupational and Environmental Medicine Program. They utilised demo- graphic, occupational, and work-environmental questions, along with ones assessing injuries and illness events, and mental health outcomes (symptoms of depression and anxiety). The final survey was the result of feedback gathered from seafarers over three months of ship visits. The survey was then actively promoted for three months, during which time it attract- ed 1,894 participants, from which a representative cohort of 1,572 seafarers was selected.

Being out at sea for extended periods of time exposes seafarers to several factors that challenge their mental health. It is important to recognise when crew members feel overwhelmed by these factors.

Help is available. People have a lot of worries and seafarers are no exception – you are never alone; support is closer than you think. If you need help, talk to your fellow crew, or the mental wellbeing champion onboard. If you want to keep your concerns private, a professional organisation like The Mission to Seafarers can provide support; otherwise confide in your loved ones.

Standard Club has launched a series of posters focusing on seafarer wellbeing. Designed to grace the walls of communal areas on board ships, the posters focus on healthy eating, fitness, mental wellbeing and socialisation.

Using a smartphone camera to scan the QR code on the posters, seafarers can access valuable advice and tips on how they can look after their wellbeing. Print and share the full set to encourage a healthy and happy crew!