It is a distressing fact that close to 800,000 people lose their lives to suicide every year. This is equivalent to one person every 40 seconds. Given that most suicides occur among those who are suffering from undiagnosed or untreated depression, it comes as little surprise that in the shipping industry, where mental health issues are particularly acute, there are, sadly, too many cases of crew members taking their own lives.

There is insufficient data on the rate of seafarer suicides globally. The UK P&I Club reported in 2017 that suicide rates among seafarers experiencing mental health problems had more than tripled since 2014, but precise figures for the industry are lacking.

There have, however, been recent studies on the mental health of those working at sea, which have produced some concerning results. The Seafarer Mental Health Study, published by the ITF/Seafarers Trust in October 2019, found a high prevalence of depression in seafarers. Of those completing a health questionnaire, 25% showed indications of having suffered depression over a two-week period. More concerning still was that 20% of those surveyed had suicidal ideation, with 2% reporting that they had experienced suicidal thoughts nearly every day over the previous two weeks.

Seafaring is an intense environment. Social isolation, fatigue, money worries and work pressures are all common- place issues, and even factors such as the quality of food on board and access to physical activity, can have a negative influence on a seafarer’s mental wellbeing. All ultimately have the capacity to put crew at increased risk of depression and suicidal thoughts.

So what does a seafarer do if they are feeling suicidal? A study carried out by international maritime charity Sailors’ Society and Yale University in March 2018 across 1,000 seafarers, found that only 21% had spoken to a colleague about it, and nearly half (45%) of them said they had not asked anybody for help. These are very worrying statistics, especially given how much time seafarers spend with their fellow crew.

The sad fact is that the vast majority of suicides can be prevented, but often it is down to others to spot the warning signs. This is why The Mission to Seafarers is working to train its chaplains in safeTALK suicide prevention training. Originally developed by LivingWorks in Canada, safeTALK champions a community-based approach and rests on four simple steps: Tell, Ask, Listen and Keep-safe. The philosophy is that anyone, regard- less of background or experience, can learn skills to recognise when someone needs help and how to talk with them. If they identify a person with potential thoughts of suicide, they then have the tools to speak to them and connect them to specialised support.

The Mission’s goal is to develop a global team of safeTALK trainers. As the Revd Lance Lukin, the Mission’s regional director for Oceania and safeTALK trainer, comments: “Most people with thoughts of suicide do not want to die, they simply want the pain that is causing them to think about suicide to go away. By being aware of how others might be feeling, and having the skills to be able to identify the signs, we can save lives. And every life counts. One death by suicide is one death too many.”

Port chaplains and volunteers are used to seeing first-hand the impact that long months at sea can have on the wellbeing of crew. Professionally trained in advanced mental health care and post-traumatic stress coun- selling, they are well-experienced in providing emotional support to seafarers. By undertaking safeTALK training, however, they have the add- ed skill of being able to identify those at risk of suicide and ensuring that they receive the appropriate help.

Indeed, as the people who encounter seafarers on a day-to-day basis, port chaplains are ideally placed to look out for the warning signs. A great deal of work has been done over the past few years to break down the taboos surrounding crew mental well- being, yet the stigma persists and cries for help often go unheard. As Revd Lukin highlights: “In most cases, those who are having thoughts of suicide try to make others aware of how they are feeling. However, due to the stigma around suicide, these attempts at telling others are often subtle and are therefore often missed.”

So far over 50 members of staff have been trained worldwide. Revd Lukin successfully delivered the half-day workshop at the Regional Directors’ Conference in Brisbane last September and at the Africa Region meeting in Durban in November. As he reports: “Within days of the training, staff have already used the skills and saved lives. Once people know what to look for, and then how to ask – they gain the confidence to help, and helping saves lives.”

One of those who quickly put their new skills into practice was the Revd Canon Andy Bowerman, regional di- rector for the Gulf and South East Asia. He received a call late one evening, about a week after receiving the train- ing, from someone he had supported as a Chaplain many years ago. As Revd Bowerman recalls: “He was clearly very distressed and explained a little about his situation and how desperate he was feeling. This was apparent from the pitch and tone of his voice and from how agitated he sounded. The training that I had received meant that I was very direct with him, much more so than I would have been otherwise. After exchanging initial information, I asked him – are you thinking about suicide? He replied that he was and that he was driving to the coast for that purpose.”

Revd Bowerman was some 3,500 miles away, but as the individual began to talk and became calmer, he used the information he had learnt to make sure he could be contacted by someone who was closer to him. “I listened for a long time and waited on the line until he was back with his wife at a safe location. I then called back a few hours later and found that they had already sought the help of one of the contacts that I had shared. I was so grateful to have received the training and they continue to receive the support that they need.” 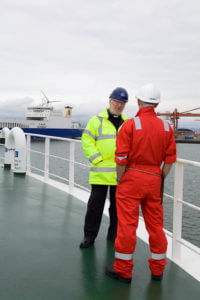 The training has given chaplains more confidence to raise the topic of suicide with seafarers Credit: Jamie Smith

The training has also given chaplains more confidence to raise the topic with seafarers, which can in turn lead to greater support for those affected by the loss of fellow crew members. As Mark Classen, port chaplain in Richards Bay, who attended the training in Durban, reported: “Since the amazing course, my wife and I (who also attended) have gently broached this sensitive subject of suicide with seafarers. One example was one night here at the centre we were talking to a Filipino engine rating about it, and he told me about two colleagues of his on another vessel: one com- mitted suicide in Singapore. Another apparently jumped overboard on route from Brazil to China. We shared that if he ever needs to talk about it, we are here.”

Having chaplains who can identify and support those at risk is vital to the industry, now more than ever. As smaller crew sizes and greater connectivity lead to fewer opportunities for social interaction on board, and faster turnarounds result in less time for much-needed respite ashore, seafarers are only becoming more vulnerable to mental health problems.

The development of an in-house programme is now underway, the aim being to have a course that can effectively be taken off the shelf and run locally in a region, thereby reducing travel costs. By rolling out the training across all regions, the Mission will soon have a global fleet of chaplains who know what to look out for and the steps to take. They can offer immediate help to those at risk, and ultimately save lives.

Verity Relph is the project support officer at The Mission to Seafarers.