Home » The Sea » Taking the guesswork out of drift

Taking the guesswork out of drift

As an oceanographer employed at the US Coast Guard, one would be forgiven for thinking that Arthur (Art) Allen’s work has little bearing on the international seafaring community. But the understated work that Art has pioneered throughout his career has positioned him as one of only five experts in the world on ‘drift characteristics’.

The outputs of Art’s lifelong research and data analysis on drift of people and things have had a fundamental impact on improving the effectiveness of at- sea search and rescue. In short, Art’s work has saved seafarers lives by the hundreds, if not the thousands.

That Art was destined to work in a water-related field was inevitable. He grew up beside a large lake, on which he frequently enjoyed sailing. So, when he was considering his undergraduate degree choice, a Bachelor of Science in Aquatic Science and Engineering seemed a good fit. “Most scientists,” he tells The Sea, “find something aesthetically pleasing about their subject. For me, it was water.”

He then successfully completed his Masters in Physical Oceanography, moving straight into a two-year posting with the US National Oceanic and Atmospheric Administration as an oceanographer. Then, in 1984, he joined the US Coast Guard (USCG) to take up the same role.

During his time at the USCG, Art pioneered a new way of thinking about drift in international search and rescue (SAR) operations. As part of a small team, Art developed and employed innovative techniques to determine the drift of common SAR objects and developed a taxonomy for them.

Over his career he has researched how people, kayaks, motorboats, trawlers and a huge array of other objects drift in vast coastal waters, under a multitude of conditions. That work paved the way for improved search and rescue policies and ultimately led to the development of the Search and Rescue Optimal Planning System (SAROPS), a comprehensive SAR planning system used by the USCG in the planning and execution of almost all SAR cases in and around the US and the Caribbean.

The SAROPS tool incorporated many more parameters into the SAR mix to better determine search areas for those in distress or lost at sea. However, while now universally lauded, getting to the point of releasing SAROPS was no small feat. First, the journey to go-live of the first version of SAROPS in 2007 began in the late 1990s with the writing of algorithms and testing prototypes. Second, there was some initial pushback to acceptance of the new system. Art explains that while there were strong advocates for a replacement for the old USCG SAR systems, there was a reluctance to ‘throw away’ a system that was already running. “There was a view that what the USCG had was adequate.” However, he adds: “We were able to demonstrate how much more effective SAR could be.” The SAROPS system proved its worth in just a matter of days.

The progression is plain to see: in 1984, the USCG had seven search objects defined; now it can search on over 100 search objects thanks to Art’s profiling and research. Much of this work has been simplified for International Maritime Organization manuals.

Characteristically humble, Art is keen to include his co-collaborators in discussions about SAROPS. “While I certainly contributed to the SAROPS effort it wouldn’t have happened with- out others. It may be my algorithms, a lot of my ideas and the things I proto- typed and demonstrated, but it’s not my code that is in the field.”

The current version is credited with saving about a thousand lives a year. Statistics suggest that the USCG plucks 10 people a day out of the ocean, on average. A further three sadly die before they’re found. Taking into consideration that the US SAR area is three times bigger than the continental US, the SAROPS tool has proved invaluable. The USCG’s 49 operation centres cover most of the North Pacific – an area that Art describes as “the tyranny of distance” – and the Gulf of Mexico, the Great Lakes and a large portion of the North Atlantic. 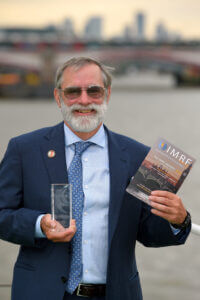 The understated beauty of Art’s work is his unrivalled knowledge of the parameters that relate to drift. In an example of his approach, he was asked what could be done to improve SAR for users of stand-up paddleboards. His immediate approach was to buy two SUPs, equip them with sensors and a current meter and then simulate drift patterns.

He notes that vast improvements in oceanographic technology have helped him in his search for ever-greater SAR efficiencies. Instruments are smaller and lighter and computer processing is much faster today than when he started in 1984.

Then there’s the improvement in data availability. “On the other side of that is the real continual improvement in operational numerical models of winds and currents available to us around the globe,” he says. “That’s the other part of SAROPS in that we have an equally large programme to go out and gather all the operational models from around the world and make those available to search and rescue.”

Over 50 numerical models and data sources for surface currents and another 30 meteorological measurements are fed, sometimes daily, sometimes hourly, into SAROPS.

Art has also spent time analysing survival suits and survivability. He explains: “Here, I looked at the model of prediction of how long people can survive in the ocean, working with human physiologists and a small community of experts on the physiology of hypothermia.”

Art officially retired from the USCG last year and his replacement has been hired, but he hasn’t cut his ties completely: he’ll be returning for a six-month stint to mentor his replacement and share his technical knowledge. “I’m ready now to pass things on,” he says. “But I’ll stay the hell off the ocean!” That said, he will be enjoying one of his lifelong passions, canoeing, in retirement and if he’s not on the lake Art can be found biking or hiking.

He’s not worried about the capabilities of the team he leaves behind and describes the “pyramid of knowledge” that continues to work on SAROPS and SAR in the USCG.

At the bottom of the knowledge pyramid there is the standard information that can be found in the SAR tools and manuals. “That covers the vast majority of the cases that the 1,000 SAR controllers handle.”
Then in the middle of the pyramid there are the USCG’s sector controllers within each district who each have 10-plus years of data to draw on. At the top of the knowledge pyramid sits Art. “If there is an unusual problem, which is outside the scope of normal operations, then it comes to me. If it gets to me then I know that it is a problem that no- one else knows.”

Asked by The Sea whether he would choose the same career path if he had his time again, Art replies with an emphatic “absolutely”. “I was very fortunate to match my abilities to this particular job,” he says. “I was given 100% freedom. I was told, ‘we’re not sure what you are doing, but keep on doing it’!” Those at sea have a debt of gratitude that Art was given that vote of confidence so many years ago as the results of his unremitting focus on drift are now plain to see.