The ICS’ Guy Platten explains why seafarers are absolutely not forgotten

2020 has been one of the toughest years in living memory. While the pandemic itself has taken its physical toll, the mental anguish caused by extended periods of isolation and the need to keep a distance from friends and family has been just as crippling for so many people around the world. Seafarers have had a particularly hard time with national lockdowns inadvertently calling an abrupt halt to crew changes, a humanitarian problem that is still unresolved nine months into the pandemic despite the best efforts of so many in the industry.

Guy Platten, secretary general of the International Chamber of Shipping (ICS), has worked fervently throughout the crisis to come to the aid of seafarers, co-ordinating pan-industry co-operation, campaigning for the right for seafarers to be designated ‘key workers’, and actively raising funds to support the Mission in its programmes to offer welfare support throughout the pandemic.

Speaking to The Sea, his message is loud and clear: “Seafarers are not forgotten, absolutely not.” Guy has spent many hours every day, seven days a week, talking to people to get the message out that seafarers are “global heroes”.

“You are the key workers and without you the world would have ground to a halt over the past nine months,” he says. “All through that time you’ve delivered the food, the fuel and the medical equipment that enabled economies and societies to be able to function.”

The challenge of crew change as borders closed or placed undue restrictions on seafarers has been massive and while, at the time of writing, fewer seafarers were stranded either on or offshore than at the height of the crisis, there are still too many seafarers serving well beyond their contracted rotation.

Directly addressing seafarers, Guy says: “I’d like to ask for your patience and to let you know that we take this incredibly seriously. We’re working with so many different people to put the solutions in place. And I’d like also to thank you for the amazing job that you have done for the past nine months and that you continue to do.”

As a former master mariner, Guy can relate to the psychological issues that the crew change crisis has created. His career at sea began in 1982 with the Royal Fleet Auxiliary Service. He joined the UK’s Royal National Life- boat Institution in 1993 as an inspector of lifeboats, and following this he served with the Ministry of Defence as a salvage officer and led or contributed to a number of projects including the removal of oil from a sunken World War II battleship, recovery of ditched aircraft and the refloating of a grounded warship.

While he acknowledges that it has been a while since he was at sea, he can vividly remember the emotions associated with the end of a rotation. “I can remember how excited you were when you came to the end of your time onboard the ship and you were going home to see family and friends and able to participate in family life again. I can really understand that anticipation and the distress of missing a key event or the passing of a loved one. If you have been away and you have that separation, it can be an incredibly lonely time.”

One acute difficulty for seafarers is that they may feel powerless in solving the problem. They cannot do much more than make their voice heard, which they have been successful in doing, Guy says, but it’s also really important for them to demonstrate how resilient they have been and how professional they have been throughout this crisis.

What more can be done? Guy admits this is a question that he asks every day. With governments rightly concentrating on their national populations, seafarers have become “collateral damage”, he says. “Moving forward, we need to make sure that shipping is understood by society as a whole as an absolute necessity,” he adds. 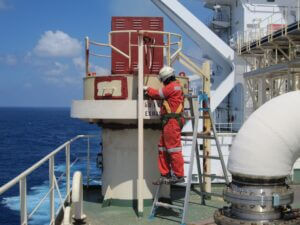 Two developments will help the industry better meet that challenge in the future. The first is using the unprecedented co-operation between industry partners, bodies and governments during this pandemic as a springboard for future collaboration – to the benefit of seafarers. “Everyone put their divisions aside and came together for a common purpose,” explains Guy. “Once you realise that we are not all against each other and that we ultimately have the same objectives, I think that has to be good.

“Once the Covid-19 crisis has passed – and it will pass – there are so many other challenges, such as the decarbonisation of our industry. The links that we have forged over the last few months will hold us in good stead for what will be the next major challenge of moving to a low carbon future.”

The second development has been the ability to engage the mainstream media to highlight the plight of stranded seafarers. “We have had far more mainstream media coverage than ever before and it has been around the crew crisis and the human element side,” says Guy. “We need to do more and we must capitalise on that going forward as an industry.”

There will, he adds, always be a need for seafarers. While headlines push the autonomous ship message, Guy says that he cannot see the industry being without crews “for a very long time”. “The skill sets will change – we need to accept that and have the right training in place to be able to adapt to that – but there is a very strong future for seafarers.”

He also hopes that this crisis has not put people off pursuing a career at sea: “It has been an incredible career for me. I joined my first ship at the age of 18 and I had such an amazing time.”

While the crew change emergency has been a priority for the ICS, there are other programmes that it continues to work on. Top of the pile is the environ- mental side of the industry to meet the ambitious IMO targets for the industry to reduce greenhouse gas emissions by 50% by 2050. “To do that we have to start bringing zero carbon-fuelled ships in from the early 2030s and they will require training,” says Guy. The ICS has also successfully lobbied member states for a comprehensive review of the

International Convention on Standards of Training, Certification and Watch- keeping for Seafarers (STCW), 1978, the intention being that seafarers are brought along on the journey to a zero carbon future and that they are not an afterthought.

Looking further ahead, the ICS is also considering what changes may need to be proposed for the next planned update to the Maritime Labour Convention (MLC) with early discussions scheduled for autumn 2021.

Guy makes the point, however, that the problem with the MLC is not the convention itself, but rather the lack of adoption by some countries. “That has been a real issue,” he says. “For example, one of the awful things during this pandemic has been the lack of access to medical facilities or medical treatment for non-Covid related issues. People still get ill at sea and I’ve heard some heart-breaking stories where countries have just said ‘no’ to medical access. So, it’s not so much changes to the MLC, it’s more about making sure governments live up to their obligations under the MLC.”

But there is a more pressing Covid-related drive that Guy is working hard on today. With talk of viable Covid-19 vaccines starting to circulate, he wants to make sure that seafarers are seen as key workers with access to the vaccine when one becomes available to keep those “global heroes” safe in 2021 and beyond.

The Sea newspaper is the best source for all the latest news and safety information for seafarers. Sign up using the form below to automatically receive the latest digital copy of The Sea hot off the press direct to your email address four times a year

Many events occurred during the month of October – the lead up to the US elect...