Why should it be such a struggle for cadets and other trainees to find berths aboard ship to give them the sea experience they need to progress?

What sort of short-sighted owner cannot provide a berth for a couple of cadets, on account of the shortage of accommodation on his ship?

This apparent reluctance to provide the necessary facilities to train the next generation is a worldwide problem, with shipping companies citing the cost of training or the expectation that this should be the job of somebody else and not the shipping company. There are too many companies perfectly happy to poach officers trained by others and thus “oven-ready” for work, because training their own is just too much trouble.

It wasn’t always like this. Go back to the days of sail and you would have found half a dozen apprentices aboard every deep-sea ship, serving four years’ indentures, while learning their trade
as deck officers. And it wasn’t that long ago that most deep-sea ships would have two or even four apprentices, and a couple of engineer cadets all learning the “company way” of doing things and preparing them for the world of work as a certificated officer.

There were liner companies whose investment in their future staff included cadet ships, with training staff embarked to give their young officers the best possible grounding in their profession. And even in those countries where the training was ‘front-loaded’ with time in college prior to their sea time, there was no question about berths being available when the trainees finally went to sea.

It is difficult to know when the responsibility to train one’s own staff was diluted by new attitudes which regarded training not as an essential investment, but an expensive additional and avoidable cost. In an era of tightening margins, with cost-cutting an essential part of keeping a shipping company afloat, training was an obvious target to prune the expenditure to more reasonable levels. It was also more than possible to merely buy in people trained either by other shipping companies, or who had emerged out of state systems.

The training burden was also something that could be passed over to third party ship managers and it is fair to say that the biggest of these organisations now account for a major part of the training regime with their own training establishments, mostly in those countries where they recruit their seafarers. And yet even the biggest ship managers remain concerned about the shortage of berths for trainees aboard ships they manage. It was some years ago that the head of one of the world’s largest management companies suggested to owners that if they would outfit a ship as a training vessel, the manager would operate it for free. It is believed that there were no takers, even for this generous offer.

It is, of course, the owner of the ship who will decide whether there will be space aboard for trainees, and with ships being delivered with the bare minimum of accommodation, there is often no room for even a couple of extras aboard a vessel delivered by a shipyard against the tightest of budgets. It is a sort of industry-wide lack of generosity, which might be deplored, but can be understood, in an era where margins in shipbuilding, ownership and indeed management, remain so tight.

Shouldn’t there be a requirement in law or regulation for all ships to carry sufficient accommodation for a few trainees? This, some years ago, was a proposal from the Government of India delegation to the International Maritime Organization, probably after some hard lobbying by their ship managers looking for sea time and berths for their cadets. Sadly, the proposal did not gain any traction, but maybe it should be taken up again. 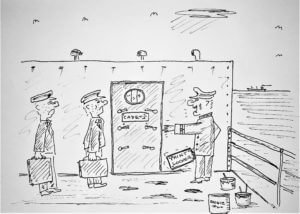 Good training is expensive, as it involves college time, expert tuition and these days, expensive simulators. It is also disappointing when those who haven’t spent anything on training swoop in and capture officers that others have lavished training time and a lot of money on. Maybe we need something of a new debate on the whole subject of training and the way the industry grows a new generation.

Read more
Latest News 31st March 2020
How is the Mission supporting seafarers during the coronavirus crisis?

In light of these challenging times, we want to celebrate and salute some of the...