Home » The Sea » A voyage to hell and back

A voyage to hell and back

Seafarer Vikas Mishra, abandoned on the cargo ship Tamim Aldar  for almost three years, speaks to The Sea about his ordeal

In October 2016, Vikas Mishra boarded the Tamim Aldar cargo ship, moored in Bahrain and destined for Iraq, for a job as a second engineer. In March 2017, he asked the company employing him to relieve him. He was told to make one final voyage – one which, unbeknownst to him, would turn into a fight for justice and survival beset by desertion, squalor and starvation.

That autumn, one of the Tamim Aldar’s engines failed off the coast of the UAE. The crew were unable to manoeuvre the vessel, and they were instructed to drop anchor and wait for further orders. However, the firm that owned the ship, Elite Way Marine Services, didn’t send anybody to repair the vessel. After months passed without anyone receiving pay, the crew realised they had been abandoned – along with seafarers on seven other vessels owned by the company, which had alleged- ly gone bankrupt. According to an International Maritime Organization and International Labour Organization database recording abandonment cases, 276 seafarers were abandoned on 23 ships in 2019.

Vikas is the sole earner for his family back home in India. He needed his full salary, and he initially didn’t want to leave the Tamim Aldar. Vikas, now 35 and discussing his experience with The Sea, describes his and his colleagues’ abandonment as one of a fight for life. In one Tweet sent while aboard the vessel, he said that life on board was “hell”.

“We were just trying to survive some- how,” he says of the abandonment, later adding: “We were waiting and we were praying that some miracle would come and somehow we would leave the cell [the ship].”

In June 2018, things got even worse for the Tamim Aldar when Elite Way Marine Services stopped supplying the ship after the company was banned by the UAE’s Federal Trans- port Authority – Land & Maritime (FTA) from sailing any vessel, following complaints from various ships. 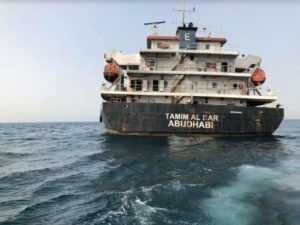 The Mission joined with other welfare groups to help the Tamim Aldar’s seafarers fight for justice
Credit: Human Rights at Sea

The Mission and an Indian embassy stepped in to make up the shortfall of provisions and water, but couldn’t supply fuel due to the high cost. With only three hours of electricity available on the ship per day, the boat was plunged into darkness at night.

During Vikas’ ordeal, the vessel teemed with cockroaches, bedbugs and mosquitoes, and crewmate Arso suffered from rashes and skin allergies. Food and water were scarce, with Vikas losing over three stone during his abandonment. In the summer, the group faced temperatures of around 45 or 50 degrees during the day, with no air conditioning, and on the vessel, high temperatures during both the day and night left the crew unable to sleep regardless of whether the sun had risen or set. There were times when wood had to be broken up to use as fuel for cooking on the rusting ship deck. Mobile phone net- work availability was also low.

The seafarers spent their days trying to attract attention from passing vessels, talking to one another to pass the time and fishing for food due to the lack of provisions. Someone would get a mobile phone charged so that people could communicate with their family and on social media, and during his time online, Vikas used Twitter to speak out about his plight, with his emotive posts generating attention.

“In our case, we got so much support from the Mission and Indian embassy, and the FTA also supported us,” he notes.

By the time the seafarers on the Tamim Aldar left the ship for good in August 2019, they numbered just four. Nine people had originally been abandoned on the vessel, but with depression having set in, others had chosen to settle for less than their full salary and departed.

Vikas and the three remaining sea- farers had already made a bid to come ashore in June after the ship began listing dangerously and the crew had no potable water, bunkers, lube oil or supplies. In a letter dated June 26, the seafarers said they had abandoned the vessel because of a “pathetic situation”, claiming that the ship was a threat to their lives and that Elite Way Marine Services had given them no option other than to abandon it. No electricity was available on board the vessel and “improper food” meant the crew were physically and mentally unwell. The seafarers, in their own words, were depressed and helpless.

The group set to shore in a lifeboat, but soon found themselves returning to the deteriorating Tamim Aldar. The seafarers told the charity Human Rights at Sea that once they were ashore and had had their case lodged as a criminal complaint with the United Arab Emirates Coast Guard, the possibility of them being imprisoned was suggested, greatly concerning and upsetting them. The crew therefore had to accept returning to sea with owner assurances that they would be resupplied shortly. The FTA subsequently reportedly said that no laws were in place to imprison abandoned seafarers and confirmed that they would not face arrest in such circumstances.

Some days after this ordeal, the Tamim Aldar was towed nearer to a safe anchorage close to Dubai in the UAE until the problem of unpaid salaries could be resolved and the crew permitted to go home. Then, at 2100 hrs on August 8, Vikas received a message informing him that he and his crew could finally come ashore. It was, he told The National (a newspaper published in the Emirati capital Abu Dhabi), “an amazing moment”. By 10pm that day, a boat had arrived to take the men to land, and the seafarers were subsequently housed in temporary accommodation on a barge in Dubai, under the care of marine and offshore services organisation Mubarak Marine. Vikas decided to come off the ship as he was under the impression that he was to receive 80% of his owed salary.

“We are still negotiating, as I have to support my whole family, but we are just glad to be off the ship at last,” Vikas told The National soon after leaving the Tamim Aldar. At that time, the second engineer anticipated being back home with his wife and two children within days.

However, it took until December to arrange visas and for the owner to come up with the funds to repay the remaining crew. And while the remaining seafarers made it home in time for Christmas, it is clear from speaking to Vikas that not everything can be compensated for. His nine-year- old son has been asking why he is not coming home, while his four-year- old daughter – having been just nine months old when he left to go to sea – doesn’t know him. “She knows me by face … but she doesn’t know exactly who is [her] father and why he is not coming,” he reflects.

Vikas finally made it home in December 2019

According to Vikas, the father of one seafarer abandoned by Elite Way Marine Services died from throat cancer as the seafarer could not provide sufficient money for treatment. Another Tamim Aldar crew member reported losing his home, the vessel’s captain saw his marriage break down, and there are other stories of how the company’s desertion of multiple vessels has affected those left to pick up the pieces.

Now Vikas wants legislation put in place to deal with situations like his. “It is very important to make strong law so we can tackle … abandonment cases,” he says.

Given the hardship Vikas and others have suffered, it seems like a justified request.