Home » The Sea » A Day Of Praise For Seafarers

A Day Of Praise For Seafarers

For 160 years, churches have united every July to celebrate Sea Sunday. It is an opportunity for
people around the world to remember seafarers and raise money to support the vital work of maritime charities such as The Mission to Seafarers.

The Revd Canon Andrew Wright, secretary general of the Mission, reflects on the importance of the
day: “It provides a focal point for a celebration of this amazing group of men and women, on whom
we are all so dependent but who are also often invisible. Not for nothing do some talk of ‘sea blindness’. It is an opportunity to remember the very particular challenges faced by those who work at sea and to applaud dedicated service which so many take for granted.”

The global Covid-19 pandemic has made more apparent than ever the vital role that seafarers play
in our lives. As we look at the empty supermarket shelves, we are compelled in a way we have not been before to reflect on how these goods make their way to our homes. As Canon Wright comments: “Perhaps the Covid-19 crisis, which has also brought many additional difficulties for seafarers, will also highlight the essential nature of their work, sustaining the supply lines, including of food and medical  equipment, without which our lives would be swiftly impoverished.”

Sea Sunday is officially held on the second Sunday in July, but in reality it is a moveable feast, as churches find a day which best suits them. Neither are the celebrations restricted to church groups – schools, community groups, families or groups of friends can all get involved. It is a chance for people to come together to celebrate, pray and give, and the giving need not be financial. Children can write messages to send to seafarers, while some use it as a focus for knitting woolly hats.

Churches can order a pack with suggested readings, hymns, and fundraising materials, and representatives from the Mission to Seafarers are often invited to speak at services. Last year, Canon Wright travelled almost 800 miles in his car over the course of two Sundays to deliver Sea Sunday sermons. His journey took him to Newcastle, to a packed chapel near the Mission’s Centre in South Shields, and the following Sunday to Hertfordshire, to an outdoor service overlooking the water in Beaulieu, in the New Forest, which was accompanied by a brass band.

The usual focus is a church service, but there is no set way to observe Sea Sunday and many
communities have their own unique celebrations. In Falmouth, the Royal Naval Association organises an annual parade, where young cadets, veterans and civic dignitaries march through the town centre  supported by the Royal Marine Band. In Whitstable on the Kent coast, Sea Sunday has for many
years been celebrated alongside the Whitstable Oyster Festival. The ecumenical service is followed
by a procession down to the harbour, led by the local sea cadets’, TS Vigilant, band. The Revd
Rachel Webbley, Team Rector of Whitstable Team Ministry, views Sea Sunday as a significant date for  the local community: “We are a coastal town that sees tankers going up and down the coast to
Tilbury. It is really important that people know where their goods are coming from. Sea Sunday
increases appreciation, lets people know the stories and keeps it all human.” 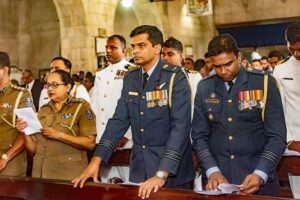 The day has an increasingly global dimension with more and more churches around the world taking part. For some, it is a distinguished occasion. In Sri Lanka, at St Peter’s Church Fort, one of the oldest churches in Colombo, more than 300 people gather for the Sea Sunday Thanksgiving Service. It is a significant event in the church calendar, attended by diplomats, the Navy, Air Force and Police, and accompanied by the Sri Lankan Navy Band and bag pipers.

Meanwhile in Tuticorin, the Sea Sunday service only marks the beginning of a day packed full of activities. Last year saw 150 members of the seafaring and fishing communities from the coastal villages in and around Tuticorin loaded into vans and transported down to the harbour to enjoy games on the seashore. Competitions for all ages were held, such as scooping sea water into glass bottles and a lemon and spoon race for children along the beach. After Holy Eucharist on the seashore, it was then back to the centre for a special fellowship dinner.

The Revd Isaac Franklin, the Mission’s Port Chaplain in Tuticorin, is keen that people reflect on
the human side of shipping and the sacrifices that seafarers make: “While shipping is a vast business the human elements are often neglected. The seafarers are the human elements who endure hardships and suffer loneliness on board due to separation from their loved ones. With this awareness, people are motivated to pray for the seafarers and their family members.”

For many who attended the celebrations in Tuticorin, the day had an especially personal significance. As Revd Franklin observed: “The gathering of the seafarers’ families during the special programs arranged for the Sea Sunday gives them an opportunity to learn from one another the different problems they face in their lives and how they can be tackled.”

This year, of course, presents significant obstacles to the usual celebrations and some creative thinking has been required. With the world in lockdown, there are plans in place for a virtual service in place of the Mission’s traditional Annual Service for Sea Sunday at St Michael Paternoster Royal in London. Seafarers, families and churches are being encouraged to send their own contributions to the video, which will be streamed via YouTube. Whether it be a reading, a dance number, or a sung duet, this is a chance for people all over the world to get involved. The video will be made live on Sunday 12 July and churches can use it as part of their own online service for Sea Sunday.

Sea Sunday is of course not the only date in the calendar aimed at raising awareness of seafarers.
Every year the International Maritime Organization (IMO) celebrates World Maritime Day, which
centres on the issues of shipping safety, maritime security and the marine environment. The IMO
is also responsible for the Day of the Seafarer, an official United Nations international
observance day that takes place on June 25 every year.

This year it will focus on seafarers in the front line of the Covid-19 crisis, those who are stranded on board ships, waiting for relief crews or unable to be repatriated home due to travel restrictions.

Indeed, the global pandemic has brought many additional difficulties to the already demanding role
of the seafarer. With shore leave being denied and contract extensions rife, many are reporting feeling increasingly stressed, anxious and exhausted. It is surely more important than ever that we take the time to remember the thousands of men and women who are working so hard to keep the world moving in this time of crisis, and vital that we raise funds so we can continue to provide support to them when it is most needed.

With most seafarer centres now closed and access to ships restricted in many nations, the Mission
faces serious challenges to how it cares for seafarers. ‘Socially distant’ ship visits at the top of gangways, providing hot spot access to Wi-Fi, and the new 24-hour ‘Chat to a Chaplain’ online chaplaincy function (in more detail on Page 15) are just some of the ways in which the Mission is responding.

Despite the challenges to this year’s Sea Sunday, it also presents a unique opportunity to give the day a global dimension never before seen. It is hoped that the virtual celebrations will help unite people around the world in remembering and thanking the seafarers we so desperately depend on.

The Sea newspaper is the best source for all the latest news and safety information for seafarers. Sign up using the form below to automatically receive the latest digital copy of The Sea hot off the press direct to your email address four times a year

The Mission has launched its new e-learning modules as an extension to its WeCar...