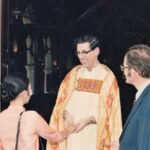 The ministry of Canon John Taylor OBE has seen him working in the Welsh valleys, in busy ports in Africa and Hong Kong and in the colourful city of Bangkok. From there he served in Rotterdam and continued his work after the mission in several parishes in the UK including Warnham and Streat until his retirement.

His aim has always been the same: to show others the humane and practical ministry of the church and he began this service as a lay assistant with the Mission to Seafarers in Cardiff. Learning how he could help seamen in their brief sojourns in port as well as the loved ones of those far away at sea was a fundamental stepping stone on his way to ordination and the life of a missionary.

Canon John’s longest posting was in the port of Dar es Salaam in Tanzania and his twelve years spent there saw huge developments in the Mission to Seafarers centre, as well as in John’s own faith and work. For his work during this time, he was awarded an OBE as well as rising to the post of Archdeacon.

Whether overseeing a major project, such as the fund-raising for and construction of a swimming pool, or ensuring that a grieving crew member was offered comfort, or a prisoner was supplied with toothpaste, John’s actions, both big and small, were all driven by a desire to show God’s love in action.

As a young parish priest in a mining community he learnt to be bold yet cooperative – traits he was to employ throughout his ministry, particularly in Bangkok, where a large expatriate community responded brilliantly to his outreach, supporting those for whom the Thai dream had turned sour, as well as providing practical and spiritual help to refugees from Cambodia and Vietnam.
Whilst in Bangkok he was appointed honorary chaplain to the British Embassy, which entailed him visiting the Embassy staff in Vietnam and Laos. He later became the officiating chaplain to the services whilst still in Thailand.

Canon John Taylor’s legacy displays his belief in a ministry with a practical message of love and help for all God’s children. He will be deeply missed by his loving family and everyone who had the pleasure of being a part of his journey.