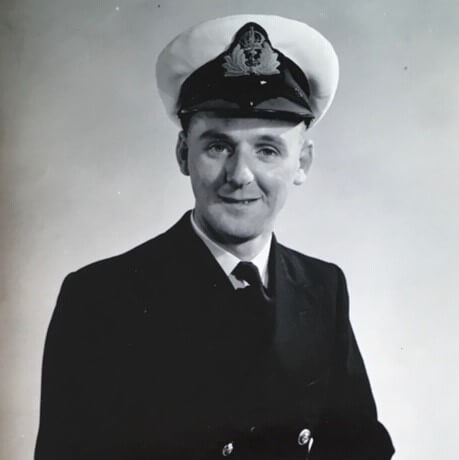 Ralph was born in Leeds on March 31st 1927. He was the much loved third child of James and Lucy Mayland and a brother to Alec and Clifford. Aged 18 at the end of World Ward II, Ralph had his military service deferred and he entered Teacher Training College in Scarborough and developed a deep love of the East Yorkshire coast. In 1946, he joined the Royal Navy and he stayed in the Navy after compulsory national service and rose to the rank of Lieutenant Commander. After several years, he left the Royal Navy to teach in London Secondary Schools, becoming a member of the Royal Naval Volunteer Reserve. In 1957, he began training for ordination at Ripon Hall, Oxford. During this time, he met Jean and they were married in 1959. In 1959 Ralph was ordained Deacon in Southwark Cathedral to serve as Curate in St Mary’s Church, Lambeth where he became a Priest in 1960.

In 1962 Ralph was appointed Priest in charge of St Paul’s, Manton near Worksop, where he was involved with building a new church and he was also made a Chaplain in the RNVR. In 1967 Ralph and Jean welcomed the arrival of baby Sarah Joy. In 1968 he was appointed Vicar of St Margaret’s, Brightside, and became a member of the Sheffield Industrial Mission.

Ralph became Vicar of St Mary’s, Ecclesfield in 1972 where he was to stay for 10 years also becoming Chaplain to the Master Cutler. He started an annual Trafalgar Day service, partly in commemoration of Nelson’s chaplain, Revd. Alexander Scott, who is buried at Ecclesfield. At Ecclesfield, they also welcomed their beloved second daughter, Alexandra Mary.

They moved from Ecclesfield in 1982 on Ralph’s appointment as Canon Treasurer at York Minster. In York he helped oversee the huge project to restore the South Transept after the fire and also became Chaplain to HMS York. Ralph retired from York after 12 years in 1994 and served as a non-stipendiary minister as Priest in Charge of Brancepeth, near Durham, until he fully retired 2 years later.

In retirement, Ralph and Jean moved to live in Barmston on the East Coast near to Bridlington where they both worked with the local churches. Their final move was to Hexham in 2009 where they were regular worshippers at Hexham Abbey, sometimes preaching and leading services. Ralph was also appointed Honorary Chaplain to the Royal Navy Eighth Destroyer Association. Visitors to their home in Hexham always received an extremely warm welcome and were entertained in a sitting room that was completely full of mementos from a full and busy life in the Church and the Navy, each item with its own story.

Both Ralph and Jean moved into care homes last year with Ralph in a nursing home. They were able to celebrate their 60th Wedding Anniversary with a party and celebratory card from Her Majesty the Queen. Ralph died peacefully in hospital on April 27th aged 93. May he Rest in Peace. Any donations in Ralph’s memory to Mission to Seafarers.