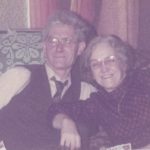 Our late parents Joan and Pete Staddon spent many years tirelessly raising money for the Missions to Seafarers. Based at St Paul’s Church in Paignton they used to do a ‘games’ stall at each of the summer fetes held along the South Devon coast. They attracted lots of custom as the games were interesting and the cost to play was pennies. Mum also made all the toy animals that were given away as prizes. After Dad passed away in 2004 Mum continued to fund raise with the help of some friends from church but in the last few years scaled it back to just coffees after church. Hopefully their hard work has helped many sailors around the world.