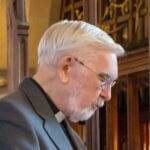 Glyn’s long association with this Benefice began in the 1970s when he and his wife, Anita, and their children moved into the then Mission to Seamen’s Chaplain’s house in Grays. As much as Glyn passionately loved his work with The Mission, he always, in his words, “needed an altar on a Sunday” and so began many years of devoted service initially to Orsett and Bulphan churches and later to Horndon when the present day Benefice was formed.

Glyn initially assisted the then incumbent Revd. Hugh Vaughan Crossley and continued as Honorary Assistant Priest to Revd. Vic Harrod, Revd. James Florance, Rev.d Vanessa Cato, Revd. Ed Hanson and latterly Revd. Susan Mann. When in 2004 Glyn suffered a stroke, his subsequent restricted mobility (much to his frustration), limited what he was able to do.

Glyn had a number of Benefice ‘retirements’ from service, but unswervingly always came back for more, until in September 2018 he finally stepped down. Many will not know that during those many years, Glyn steered the Churches through five interregna, arranging services and liaising with each of the respective Rural Deans for service cover.

A man of huge contrasts who was Secretary General to the Mission to Seafarers, Chaplain to her Majesty the Queen and Canon to Kobe Cathedral in Japan but who was, at heart, a simple parish priest who loved rugby, enjoyed a good joke, a pastry and coffee from Patisserie Valerie and a Gin and Tonic with friends.

For many in the Benefice, Glyn was a dear friend, greatly admired for his down-to-earth modesty and he will be remembered as a kind, caring and Godly man, who, of course, is greatly missed.

Finally, an anecdote from Glyn on delivering a sermon: “If after five minutes you haven’t struck oil, stop boring”.