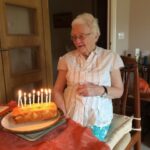 Peg was the 4th child of Wilfred Samuel Arthur Cooke and Annie Cooke. Her siblings, Edna, Maurice, Irene and younger brother Douglas were brought up in a terraced house in Easton. They lost their father in February 1928, and although they had a roof over their heads money was not plentiful and Peg told tales of having just bread and jam for tea on many occasions. She has memories of souvenirs her father brought back from his travels as a merchant seaman which she believes had to be sold to enable their mother to put food on the table. Although life was tough, it was the same for so many people at this time of economic depression and, like many, the Cooke family just got on with it. Edna married but, sadly, died shortly after giving birth to her son, Alan, in 1938. Alan was then taken into the family home and brought up by his Grandmother and Aunts. After leaving school Peg worked at Packers progressing to become a Chargehand.

She then worked at Fry’s/Elizabeth Shaw in Greenbank and one of the perks of the job was the availability of bags of chocolates that were rejected from the production line. Naturally, all the children in the family were keen to have a dip in the bags! Did this temptation increase the appeal of a visit to see Aunty Peg?

When the factory closed Peg took a job as a Cook in Baptist Mills school kitchen, as this was close to Greenbank Avenue. This was important as Peg’s Mother, Annie, suffered a stroke in the 1950s and as she was still living at home Peg took on the responsibility of looking after her mother. The Doctors thought she would not live longer than 6 months or so, but ‘Gran’ as she was known to the family lived until 1963. Peg cared for her while working full time.

On 25th March 1965, she married Thomas Gilbert Davis, a divorcé. Peg finally had a chance to live a little and they took many holidays together, by coach generally, as Peg was frightened of flying. ‘What happens if the plane crashes and I’m the only one left!’ she used to say. The furthest they went was Switzerland and I believe they brought the obligatory Cuckoo clock back with them. Many of these holidays were in the company of Gladys Bryant and her husband. Both ladies were widowed and remained the closest of friends until Gladys passed away a few years ago.Her sister, Irene, also married a local lad, Arthur Kendall. They had two sons, Paul and Tony, and following the death of Rene in the 1980s, Peg stepped in to help Arthur and his younger son, Tony, with the housekeeping, taking the bus to Henbury on a weekly basis.

Her brothers, Maurice and Doug, also married bringing three nieces and another nephew to her immediate family over a number of years. Tom passed away in September 1983, by which time Peg was already looking after one widowed neighbour or another, taking meals to them and helping with cleaning and laundry. The lack of immediate family in need did nothing to stop her generous soul carry on giving.

In 2007 Peg decided it was time to sell the house she had lived in nearly all her life and she moved to a sheltered council flat in Shearwater Court. This took her nearer to Gladys, who lived in Begbrook, and she would walk over to visit her several times a week. After Gladys passed away her own health began to deteriorate and she suffered a fall in January 2018, breaking her hip and resulting in her discharge from Southmead Hospital to Westbury Nursing Home, as she was no longer able to manage the stairs leading up to her first floor flat.

The care she received at Westbury was just what she deserved – warm and loving. She naturally endeared herself to the staff, although they never knew the vibrancy and energy of the Peg we knew and love.

Although Peg never had children of her own she has always been very involved with her nieces and nephews and, as the years passed, with the next generations of her family. She would spend weeks each year staying at one branch or another of the family, sharing in the joys and tribulations with equal heart, often with Gladys. Indeed, Glady’s family counted her as one of their own! She has always been ready to step in to help, in a domestic crisis. Or indeed celebration – who doesn’t remember her music hall style singing and dancing – an integral part of any family party.

She always got stuck into any cleaning task and wielded a pot of emulsion or a tin of gloss with the best of them. She cooked hearty meals every day – generally in the ‘meat and two veg’ style – and the portions she served up were gargantuan, a reaction perhaps to the days of her childhood when food was rather less plentiful. She always enjoyed trying different food, even if she stuck to her tried and tested style in her own kitchen. She was partial to a curry or a biryani when the opportunity arose and was never known to refuse a samosa.

Peg never took to gardening, though, ‘I’d rather clean a house down than dig a garden’, although she loved to look at a beautiful garden and always appreciated a gift of flowers.

As I have been writing this, it feels odd to be using the past tense. She has been a part of our lives forever and it will take some getting used to – we can no longer pop in to visit her. Anyone and everyone who knew her will have been touched by her warm heart, kindness, and her cheerful and generous nature.

She will be missed.