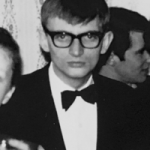 With a father who was a Medical Technician, 1st Class in the Royal Navy and brought home tales of the sea, it seemed very likely that Ian might be destined to have a career connected to the sea in some way.

Ian was born on 22 May 1949 in Newcastle, the second child of three born to his parents John and Constance MacLeod, growing up alongside his older sister Heather and younger brother Barry.  Due to the demands his dad’s career in the Navy, the family moved around quite a bit before finally settling in Plymouth where Ian finished his schooling at Plympton Grammar School where he honed his dry wit and gave free rein to his mischievous nature.

He did well at school and joined Shell as a cadet on their Marine Engineer Programme.  This involved spending quite a lot of time in Glasgow at the Nautical College and Ian progressed quite speedily through his tickets, becoming a third engineer, then a second engineer and finally a Chief Engineer at a younger than average age.  He almost regretted the speed of his progress because, having achieved Chief Engineer, there was nothing left for him to aspire to.

His very successful career took him to the four corners of the globe – from China and Singapore, to Monaco, Saudi and Dubai, the USA and the remote island of Saint Helena in the South Atlantic Ocean.  Having worked at sea first for Shell then Esso and Worldwide Shipping, Ian then took a two year break to work as a ship’s surveyor in Saudi in the mid-80s, before joining a Norwegian company as Superintendent of the ABT Summer, an oil tanker with a capacity of 260,000 tonnes of heavy crude oil.

On 28 May 1991 the ABT Summer experienced an explosion and related fire while 900 miles off the coast of Angola and 470 miles from St Helena Island.  Twenty seven of the 32 crew members were rescued having had to escape the fire and subsequent flaming oil slick, some being in the water for several hours before rescue.  The ship burned for three days before it finally sank.

Ian was one of those rescued and taken to St Helena for treatment to severe burns.  The accident took its toll on Ian, leaving him less confident generally, his humour more subdued, but also sadly caused him to feel uncomfortable at sea.

Following his recuperation, he sought work as a construction engineer with SBM and then Conoco Philips, reconditioning ships in dry dock rather than sailing and remained working until, while in China, he suffered a stroke in 2004.  You will not be surprised to learn that Ian’s strength of character led him to make a full recovery and he worked on odd contracts until 2006 when he retired fully and returned to Scotland.  As you can gather, work played an important part in Ian’s life, and it fulfilled his need to travel and satisfied his adventurous spirit.

On 13 October 1969, while he was a marine cadet studying at the Nautical College in Glasgow, Ian met Fiona Livingstone who was studying ophthalmology, and they began seeing each other regularly.

In 1972 Ian and Fiona were married at St Peter’s Church in Edinburgh and began their married life in Edinburgh before moving to Falkirk, on to Cousland and then back to Edinburgh.  Their marriage was blessed with two sons – first Graeme and then Bruce.

Ian introduced Fiona to sailing and reassured her as they left for their first trip that she shouldn’t worry because, “it never rained at sea.”  She believed him then and for many months afterwards!

Family holidays together were difficult to plan around Ian’s work but Graeme and Bruce both have fond memories of visiting their Dad and, as we heard, spending time in Singapore with him, as well as holidays to Cyprus and Menorca when they were young.  For Ian, of course, coming home was a holiday in itself and on one occasion he arrived home on the WWS Victoria when the ship was due to stop off at Leith.  The boys were waiting excitedly on the quayside that day.

Ian and Fiona moved to Gavinton in 1986 where his DIY skills were put to good use and he took great pleasure in stripping back all the wood in the house back to its natural state so it could be enjoyed for what it was.  They remained in Gavinton for 20 years and in 2006 moved to Greenlaw.

In 2012, Ian suffered a series of major strokes which completely changed the quality of his life and unfortunately removed any possibility of him pursuing his dream of doing more of the woodworking he had enjoyed when he was younger.  He spent four months in hospital before coming to live with Graeme and Tara for just under a year.  Still fiercely independent, however, he would rise at 6.30am and painstakingly dress himself, ready for Marj or Lynn, his carers to arrive at 8am… who were meant to dress him.

Ian had a great love of dogs, having kept boxers, Labradors and a couple of mixed-breed dogs over a period of years and also enjoyed the company of the collies that Fiona kept.  He had been a regular walker on Cocklawburn Beach at Berwick and enjoyed Gordon Community Wood after which he would pick up his paper and head to Rhymer’s Café for breakfast.  When he moved into Graeme and Tara’s home their dog Robbie immediately brought him a gift and left it in his new bedroom.  The small rabbit which was still alive was graciously received and quickly returned to the garden.

Such was his need to be independent that in February 2013 Ian had fought back to be well enough to move into Kerfield Court in Kelso, opposite the cricket pitch, the park where many dogs were walked, and the skatepark, so there was plenty going on.  Even though he was registered blind and suffered loss of peripheral vision, with the aid of his binoculars, Ian could keep abreast of what was going on outside his flat and could even perhaps have kept score for the cricketers!

Although unable to walk, Ian was able to transfer himself to and from his wheelchair and for outdoors use he could zip around at some considerable speed on his electric chair.  There was nothing to stop him from picking up his favourite pasties and bacon rolls from Greggs or from taking a spin around Lidl or Sainsbury’s.

His beloved grandchildren, Megan, Emma and Alice, who brought a great deal of pleasure into his life, enjoyed Ian’s company and had fun with him too, even though Emma and Alice had really only known their Grandpa Ian after he had was confined to a wheelchair.  However, a wheelchair offers a grandchild a lot of fun, as Megan will confirm.  She became quite expert at wheeling herself around the house in it when Grandpa Ian was staying with them or visiting.  The electric chair was, however, out of bounds.

Emma remembers her trips to the park with Grandpa Ian and the teddies that Graeme mentioned, but in particular ‘Pammy’ the teddy bear.  She remembers him being brave, never giving up and always being funny.  Alice remembers the lovely hugs Grandpa Ian gave them when they arrived for a visit and how he was always kind and funny.  A lasting memory for Bozena, Emma and Alice is being spoiled with chocolate – wherever Grandpa Ian was, there was always chocolate!

Being the eldest grandchild, Megan loved to visit her Grandpa and was responsible for checking Ian’s lottery tickets and she often took the time to lecture him on how much he was spending and measured it against how much he actually won!

Ian meticulously logged all of their heights on a door frame in his flat and these were updated on every visit.  For Emily and Alice, living much further away meant that there was always a significant difference in their growth between visits and Grandpa was very impressed by their progress.

Since being admitted to hospital in May, Graeme, Tara and Megan have visited Ian almost every day and Bruce and Bozena as often as was possible given the distances involved, so there is no doubt that Ian felt loved and well cared for.  His sons and daughters-in-law are all very proud of the man Ian was, of his achievements and of the way in which he handled his condition.  For his part, Ian was full of admiration for the men his sons have grown up to become, and thankful for the happiness they have found with their families.

You should feel very proud and privileged to have been such a comfort to Ian, to have shared your life with him, and to have walked beside him to the end.

In memory of 2 years at Plymouth with Ian at the start of our sea-based careers. 1966 to 68 – Keith Lumb

I was fortunate to meet up with Ian several times during our varied careers in the shipping world. It was a pleasure to have known him – Michael Undrell

My deepest sympathy to all of Ian’s family and loved ones. Although I have not seen Ian since 1968 when we all left Plymouth, I have many memories from our two years there, happy ones may I add, that will always stay with me. Rest in peace Ian – Vincent Hillier