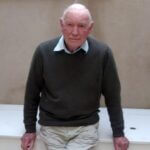 George Brian Bagnall was born in Gosforth, Northumberland, in 1935 to Gladys and Leo, a younger brother to Pat and Cliff.

He joined the Merchant Navy in 1950 as a 15-year-old apprentice, and served with Shell Tankers and Strick Line, amongst others, until 1965.

After leaving the Merchant Navy, in 1966 he joined Decca Navigator and Decca Radar as Area Manager for the North East of England, where he worked with the shipping and fishing industries.

In 1981 he moved to Surrey where he represented the company, by then Racal Decca, as Area Manager of the Middle East, Indian subcontinent, and Eastern Mediterranean, also taking on special assignments in Hong Kong, China and Russia.

After retiring in 1996, Brian became actively involved in local interests at his home in Claygate, Surrey, most notably as manager of the thriving village hall for 15 years – a job well suited to his people and practical skills.

A well known and much loved figure locally, he is survived by his wife Juliet, his children Simon, Nikki, Emma and Sophie, and grandchildren Charlie, Bibi, Jonas, Billy and Albie – a much missed husband, father and grandfather.